There is more to the political capital than meets the eye.

To many, The Hague is mainly associated with the government of the Netherlands. The corona press conferences come from there and many protests take place on the famous Malieveld. But the municipality has much more to offer than politics. On our tour we explore the diverse history of The Hague and Scheveningen, how the towns themselves changed and how they influenced the rest of the Netherlands. Along the way you will see centuries old buildings, the cradle of mass tourism in the Netherlands, remnants of the world wars and much, much more.

In 1818 Jacob Pronk opened the first bathhouse in Scheveningen. It was made out of wood and consisted of four bathrooms and a small waiting area. This was the beginning of tourism in Scheveningen, and with it, The Hague. Ten years later, the city council bought this bathhouse and turned it into one of the biggest in the Netherlands. Since then, Scheveningen beach has grown into the most well-known and popular beach in the Netherlands with almost 4 million visitors every year. On this tour you will follow the trail of these visitors from over 200 years ago and revisit some of the places they visited and see how the city has changed.

We hope you had a wonderful tour around the city centre of The Hague and the beautiful beach area of Scheveningen! Even though the pandemic does not allow for international trips, hopefully this tour showed you that a day trip (not far from Utrecht) is just as well spent and entertaining! 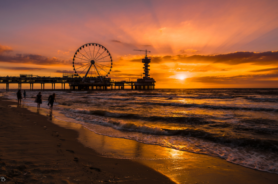