Rotterdam – Past and Future

Rotterdam – Past and Future

Rotterdam is a port city located in the west of the Netherlands. With 587,960 inhabitants it is the second largest city of the Netherlands. The name Rotterdam comes from a dam located in the river the Rotte. The port of Rotterdam for a long time has been the biggest port of the world, but now has been surpassed by the port of Shanghai. However, it is still the biggest port in Europe. The port dates back from 1872, so the city has a long-time connection to the water.

After the German bombing of Rotterdam during the Second World War, which destroyed a big part of the old city, Rotterdam has become a haven for innovative architecture. Examples of this are the Erasmusbrug, kubuswoningen and more recently the depot of the Boijmans van Beuningen museum.

As stated above, the city of Rotterdam has a rich history, but because of tragic events during the Second World War also knows a lot of innovative and progressive architecture. To highlight this, the tour will guide you through old, post-war and recent Rotterdam, while also highlighting some future developments. As Rotterdam is city connected to water, the tour will be centered around two famous bridges, the older Willemsbrug and the more recent Erasmusbrug. Once again highlighting the progressiveness of Rotterdam.

The tour is best enjoyed by foot, as you will have the time to look around. However, when preferred it can also be done by bike.

Kijk-kubus: This is an architectural phenomenon, designed by Piet Blom. The construction of the building started in 1982 and finished in 1984.  the building is used as homes, business space and school building. The Blaakoverbouwing was a wish of the municipal urban planners, not of the architect. For 2 euros you can enter a museum version of one of the homes. 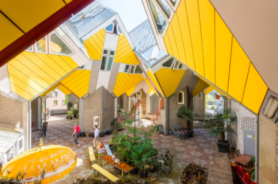 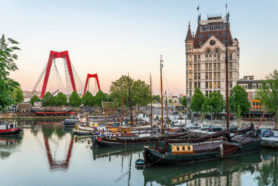 De Euromast is an observation tower designed by Hugh Maaskant. It was built for the Floriade, an international exhibition and garden festival held every 10 years, in 1960. It has a height of 185 meter and is the highest tower in the Netherlands which is open for sightseeing. The Euromast is open for rappelling and has a restaurant with a very nice view. It’s also possible to book a hotel room in the tower. 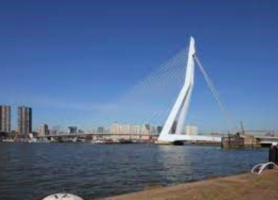 The Erasmusbridge is one of the two bridges over the Maas in the center of Rotterdam. It is named after the Dutch humanist Desiderius Erasmus, and its nickname is The Swan. It connects the neighborhood “Kop van Zuid” with the city center. The Erasmus Bridge is Rotterdam’s most important landmark and is a part of the city’s official logo.

The bridge is the largest and heaviest in Western Europe and was officially opened by Queen Beatrix in 1996. The bridge is the result of several architects and engineers. It evidences a full commitment to both technical and aesthetic standards. For example, the deck profile is very thin for aesthetic reasons but also for the shipping height.

Hotel New York is a hotel located at “Kop van Zuid”. It was a daring decision to locate the hotel here, because it was relatively far away from the center when the Erasmus Bridge wasn’t there yet. The hotel is the former office building of the Holland America Lines. It was used as a temporary accommodation for European emigrants in the 19th and 20th century.