Maastricht – Through the ages

Maastricht through the ages…

The tour will take place in Maastricht, a city of over 120 000 inhabitants located in the hilly landscape of the southernmost part of the Netherlands, in the province of Limburg. Maastricht’s location, on the river Meuse, far away from the Netherlands’ main population centres, has given it a distinct charm: it is known for its decisively southern and ”Burgundian” vibe and laid-back inhabitants. This tour aims to take advantage of that charm by educating tourists, as well as local people, on Maastricht’s unique and rich history, while simultaneously allowing participants to enjoy Maastricht’s signature beauty and ”Burgundian” lifestyle. The tour can be completed on foot within 3 hours.

The tour will take you on a journey through the ages by showing the various eras of development the city has gone through. This includes the Classical Antiquity, back when Maastricht was still a small Roman settlement along the Meuse, called “Mosa Trajectum” and ends in the 18th century when the French invaded the Netherlands. Therefore, the tour will promise to be an interesting and educational tour among the most beautiful and historical places of Maastricht.

Along the way you will pass by plenty of local restaurants and cafés to enjoy a drink or meal. We recommend you to do so, to fully experience the warm Southern way of life. Access the tour via the QR code below.

In order to ease finding your way around the historical city of Maastricht, we created a digital map you can use to navigate. The map can be accessed by clicking here, or by scanning this QR code.

Vrijthof is a large urban square in the centre of Maastricht, Netherlands. The square developed from an ancient Roman and Frankish cemetery into a semi-private space that belonged to the Collegiate Church of Saint Servatius. In the 19th century it became the town’s main square. It is surrounded by important heritage buildings, museums, a theatre and a range of hotels, restaurants, and bars. 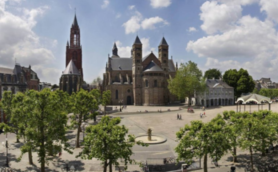 Onze Lieve Vrouweplein (Maastricht: Slevrouweplein) is a square in the center of Maastricht. The square is in the oldest part of the city, just outside the late Roman castellum. The square host the Onze-Lieve- VrouweBasiliek, this Basilica dates back to the 12th century. In the summer, the square is a popular place to grab a drink or a meal while enjoying the view of the basilica.

Op de Thermen is a square in the center of the Dutch city of Maastricht. The square, created after the renovation of the Stokstraatkwartier in the 1950s and 60s, owes its name to the Roman thermal baths excavated on site. At a depth of 5 to 6 meters below the pavement of the square Under the Baths, there are remains of a Roman bathhouse from the 2nd century.

The Sint-Servaasbrug (St. Servatius Bridge) is a 13th century stone bridge and one of the most characteristic structures in Maastricht.

De Helpoort is part of the original city wall, it is the only remaining city gate in Maastricht and the oldest city gate in the Netherlands. For about two centuries, the gate was part of the city’s actual fortifications. It lost this function when the Nieuwstad (New City), the area south of the gate, was surrounded by a wall in the second half of the 15th century. It was then used for various purposes: a meeting place for the cloth fullers or walkers, an armoury, a powder storehouse and a residence. 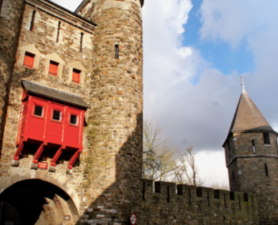 De Vijf Koppen, also known as De Drie Duiven, is a late 15th century, early 16th century roundel in the so-called Nieuwstad in the Maastricht Jekerkwartier. Together with the nearby roundel Haet ende Nijt, De Vijf Koppen formed an extension of the original 14th-century second city wall of Maastricht. Both roundels are national monuments and are iconic parts of the Maastricht City Park.

In 1638 5 traitors were discovered to be helping spanish soldiers to infiltrate the city, as a result they were beheaded. There heads were exhibited on the city wall above this pond in order to deter any further attempts of treason. Since then this place has been called de Vijf Koppen; literally translated the Five Heads. 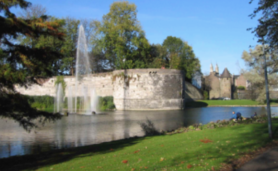 The best-known battle in Maastricht was in 1673 when Louis XIV’s French army took the city. One of the conflict’s casualties was the famous musketeer D’Artagnan.

Between 1575 and 1825, a network of corridors or mine galleries was created on the west side of Maastricht, now called Kazematten.  These corridors were used to approach and defuse the enemy underground during a siege of the city. During the Second World War the people of Maastricht packed close together and endured anxious hours while sheltering from the bombings. 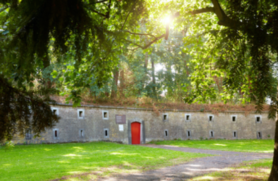 Standing proudly on top of the Sint-Pietersberg, the fort has been protecting the city of Maastricht against the enemy for more than 300 years. In 1794 the French laid siege to the city again. In vain they try to blow up the fort from corridors in the Sint-Pietersberg. The traces of the explosion are still visible in the marl quarries!

through a tour. With the route of our tour we tried to give you a varied picture of historic Maastricht

via various highlights. We hope you liked the carefully curated tour.