Amersfoort – With all your senses

The location for our city tour is Amersfoort, in the east of the province Utrecht. Amersfoort is, after Utrecht, the biggest city in the province of Utrecht with approximately 157,000 inhabitants. It’s also an old city with a rich history which dates back all the way to the 9th century AD. Due to the long, rich history of the city, there are many different things to do and see. Which is relevant to the theme of our city tour, which will later be introduced. Amersfoort is known for its scenic medieval city centre and its cute small canals. Another noticeable fact is that the Onze Lieve Vrouwetoren, which is a church tower located in the centre of Amersfoort, is the zero point of the Dutch land registry, which makes it the centre of the Netherlands.

The theme of this city tour is ‘something for all your senses’. You will walk past sights that will engage all five different senses in a positive way. We chose this theme because we think that during the pandemic a lot of our time, energy and attention goes out to negative news. For that reason, we thought it would be an interesting idea to organise a tour that engages our mind with positive things this city has to offer, instead of all the negativity which is very present in our current society. We have chosen the title; ‘It’s always sunny in Amersfoort’, to bring attention to positive feelings and the coming summery weather.

Amersfoort is known for its broad range of cultural sights. With lots of monuments, museums and bars and restaurants, the city is perfect for a fun city tour. Due to the many different possibilities this city lends itself to the theme really well. We have put in an effort to create a tour that offers a good balance of these different kinds of sights.

The tour starts at Amersfoort Centraal so you can travel to Amersfoort easily. The city center is very close to the station and makes for a nice walk to see the center of Amersfoort. The tour takes around one hour and a half walking but can easily be extended to an afternoon or day depending on if you want to spend time in the museums. Two points halfway through the tour are dedicated to your smell and taste. These are perfect spots to take a lunch break. We recommend you engage all your senses and experience Amersfoort with more than just your eyes.

Also, if you are a creative person (or want to try something new!) you can take painting supplies (e.g., small canvas, brush, primary colours) with you, to really take part in the artistic side of Amersfoort.

Instructions during the tour: 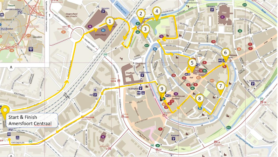 Follow this link to get the walking tour on Google maps: City Tour Amersfoort Route

On the left picture you see the former Modern art museum “kAdE”. The architect designing the building was inspired by the beautiful sea sight paintings from famous Dutch artists like Johannes Vermeer. The idea was that the sky was reflected on the glass and the little pond in front represents the sea. What do you think, did he convey the message? Walk around. Where is the best angle to see the sky and the pond?

Recently kAdE moved to the Eemhuis, the building next door. The former Modern art musem is now the Rijksdienst for cultural heritage, a government institution that protects cultural values in the Netherlands.

You do not need to go inside the two buildings to intrigue your senses because the architectural design is enough!

The Koppelpoort, which was built in 1450. To put this in perspective, this was also the decade where the first book was printed by Gutenberg, in short: it’s very old. It is a combined land and water gate in the second city wall and can be closed with giant treadmills inside. These were often operated by criminals as a punishment. In 1885 the gate was restored, and they added battlements (kantelen in Dutch) to the inside as well.

Can you imagine how this gate looked in the Middle Ages, with knights on horses and merchants trying to sell their goods? Look and see if you can find an interesting detail at or around the Koppelpoort.

This brewery has a long history which dates back to 1626 and is located near the Koppelpoort. The brewery was closed due to the cleaner water supply in the 19th century, which resulted in a decrease of beer consumption in the city. The brewery re-opened its doors in 1989 and to this day still brews the same beer which they started doing in 1626. Sadly, it might be closed on Tuesdays but there will be enough bars and breweries along the tour that you can still try real Amersfoort beer.

If it is open and you are up for it, choose a beer that you have not tried before! Cheers 😊 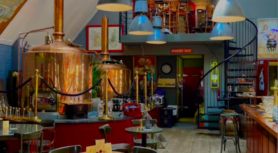 The Plantsoen Noord is a little park at the canal. It is a nice spot to rest for a little bit before you continue the tour. It’s starting to look like summer now. Can you hear and smell it? What is your favourite thing about summer or your favourite season? 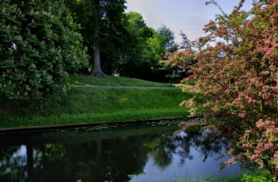 De Hof, a big square with lots of fun cafes, restaurants and a big church, the Sint-Joriskerk, Saint George being the patron saint of this city. There is a little building in front of the church that plays a song with its bells every hour on certain days. It has little figures that come out of the small doors and act out the story of Saint George slaying a dragon.

While standing on the square: close your eyes. What can you hear? The busy restaurant noises? Sint- Joriskerk bells? Other sounds? Allow some time to stay here and take it in. 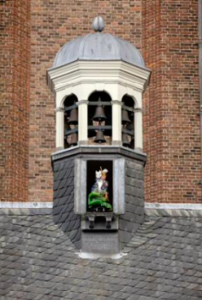 The Vlaams Friteshuis is a restaurant in the city centre of Amersfoort where you can enjoy homemade fries and other Dutch snacks. If you’re hungry you can have a lunch break here to recharge.

Discuss with your team members: What is your favourite meal? And if you have an international team member: What is a traditional meal in your countries?

(Part 2 of the route in Maps begins now) 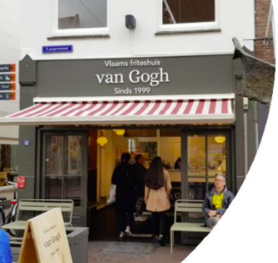 We are now walking through the Muurhuizen (wallhouses). When Amersfoort had a period of growth in the middle-ages, they built a second, larger city wall. The old one became obsolete, and they used the stones and foundation to build houses. 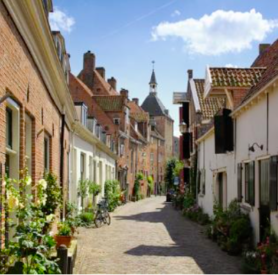 The Mondriaanhuis is a museum dedicated to the work of the famous Dutch painter Piet Mondriaan, who was born in Amersfoort in 1872. He became famous for his abstract and very unique art. His art is all about “Less is More” as well as balance and harmony. Take some time to look at some of his paintings in the museum or online. Can you see what he wanted to convey in the paintings? Of what does it make you think?

Also, if you brought your painting supplies you can find a bench now and have a try at one of his paintings! 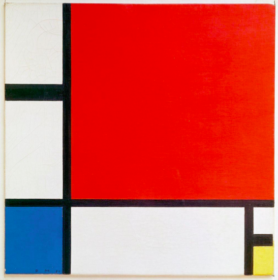 Onze Lieve Vrouwetoren, a church tower in the middle of the city centre. There are two fun facts about this place: first, the tower is seen as the middle point in the Netherlands you which can see on the picture below. Second, in the middle ages somebody had the great idea to store gun powder under the church attached to the tower. Of course, it exploded at some point. That is why there is no church attached to the tower anymore.

Try to see if you can find the marker for the “nulpunt” (middle point) of the Rijksdriehoekscoördinaten! 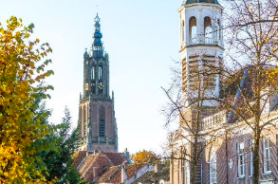 This concludes our ‘something positive for all your senses’ tour of the city of Amersfoort. We hope you enjoyed it and it has left a positive impression!